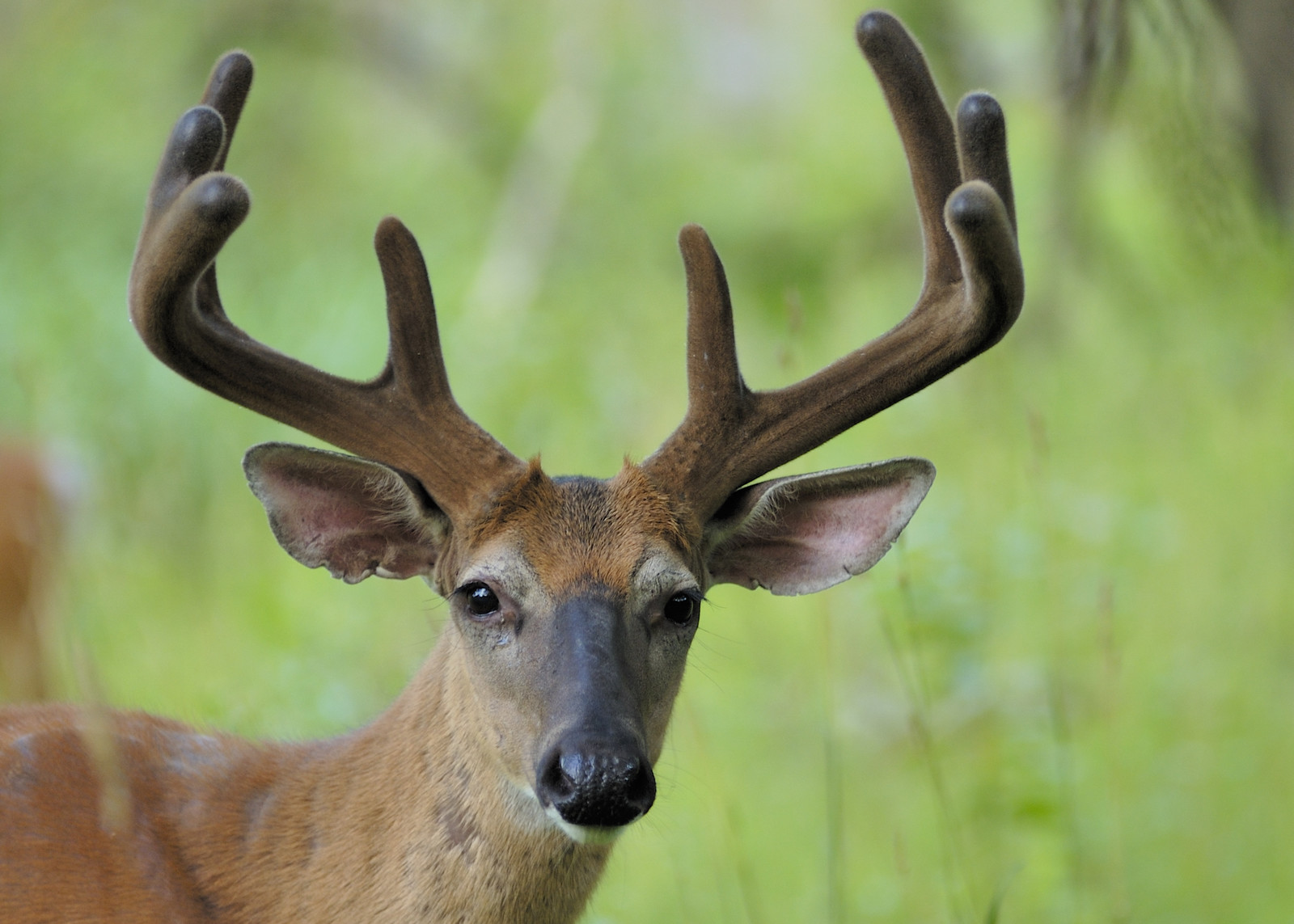 Antlers, those boney projections that cause us deer enthusiasts to dream about fall, even when it’s 100 degrees outside.  They are yet another fascinating aspect of white-tailed deer and other cervids.  Our beloved whitetail bucks, here in the south, are currently experiencing peak antler growth, putting on 1”- 2” per week and sometimes as much as an inch per day.  It’s one of the fastest-growing tissues known to man.  The growing process is regulated by hormones, primarily testosterone, which are controlled by photoperiod or length of day. Right now, antlers are covered in the soft membrane we call velvet.  It has feeling and is very prone to injury.  Because the antler is pliable during this stage, it’s not uncommon for bucks to cut or sever a beam or tine.  The hairs on the velvet serve to alert them when they come into contact with brush or other obstacles.  As summer rolls along, growth will slow as they begin to mineralize.  Blood supply will start to be restricted, which causes the velvet to die. When the velvet dries out, it will start to peel and slough off.  Bucks will speed up the shedding process by thrashing their antlers on brush and saplings.  I’ve had trail camera photos of bucks in full velvet one day, and then totally clean the next.  They’ll carry their antlers throughout the breeding season and, once that’s over, testosterone levels will start to fall.  This triggers certain cells to start de-mineralizing the bone where the antler meets the pedicle, a permanent extension of the skull where antler growth begins.  It weakens the attachment and that, along with the weight of the antler, causes it to drop off.  When the antler is cast, the pedicle is an open wound, bleeding and, then developing a scab.  Once the wound “heals over”, the growing cycle will start again almost immediately.  The antler growing process takes about 150 days.  It takes two or three times the amount of nutrients to grow a buck’s antlers as it does his skeletal system.  Throughout his young life, much of the nutrients he takes in go toward building skeleton and tissue.  The reason bucks have their best antler development at older ages is because their skeletal system is complete and more nutrients are available for antler growth.  It’s estimated that at 1.5 years old, he’s reached 25% – 30% of his antler potential, at 2.5 years 55% – 60%, at 3.5 75% – 80%, at 4.5 – 90%, and at 5.5 almost 100%.  Deer age classes are usually broken down in half-year increments because it gives a more accurate estimation of age during hunting season and when he’s carrying hardened antlers.  For example, a deer may be one-year-old in May but he’s a year and a half old in November.  Odd antlers are most often the result of injury, not genetics. An injury to the deer’s body, pedicle, or the antler itself can cause a buck to have abnormal antlers.  It’s interesting to note that an injury to the left side of the body will often show up in the right antler, and vise versa.  Speaking of genetics, the doe (mom) contributes at least 50% of the genetic makeup of a buck’s antlers.  That’s one of the main reasons “culling” doesn’t work in a wild free-range herd.  Habitat conditions can have an effect on antler development from year to year.  In the south, drought can be the biggest factor.  During our hot summers, the plants that deer depend on for nutrition suffer and become less palatable and nutritious.  Our biggest challenge to providing year-round nutrition for deer, here in Louisiana, is the period from late June through early September.  Over much of that period, bucks are growing antlers and does are providing milk for fawns, yet protein levels and palatability of the plants they depend on to fuel all of that are at their lowest level of the growing season.  One other interesting bit of trivia before I close: we often use horns and antlers synonymously but actually there’s a difference.  Antlers are cast and regrown every year.  Horns are never cast. Deer, elk, and moose have antlers.  Cows and goats, among other animals, have horns. “Horns” sounds a lot cooler though!  I’ve said it before and I’ll say it again, whitetails are fascinating creatures.  I feel privileged to be able to live and work among them.  There is no other animal like them!