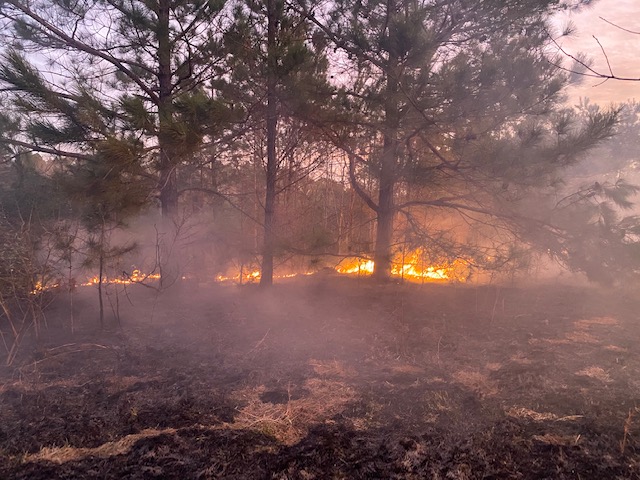 I’ve touched on the benefits of prescribed burning in other posts before but I wanted to dig a little deeper into this neglected forest management tool.  I realize that “fire” is a four-letter word that means “danger” to many folks.  That’s understandable, since tragic wildfires consume thousands of acres each year, destroying personal property and taking human lives along the way.  Fire in the woods, however, isn’t always bad.  When used correctly, it’s one of the most effective and cost-efficient tools available for forestry and wildlife habitat management.

It’s important to note the difference between wildfire and prescribed fire.  A wildfire is unplanned and uncontrolled.  It is caused by lightning, arson, or negligence. A prescribed fire is a tool used by natural resource managers to accomplish specific goals.  It is both planned and controlled.  In fact, it is oftentimes referred to as a “controlled burn”.

Over time, dead pine straw, leaves, and bush accumulate in the forest understory and on the ground.  In fire terms, we call this “fuel” because it fuels the fire and allows it to advance and spread.   Large accumulations of fuel create volatile situations that lead to intense and dangerous wildfires.  All of the catastrophic fires out west occur in areas with a buildup of dangerously high fuel loads.  Someone here in Louisiana might think that, because those fires occur in extreme hills and mountains, we’re not susceptible to them here.  Topography does play a major role in the spread of those fires and the difficulty in putting them out.  However, the contiguous acreages of pine plantation here in the South create an environment for large fires.  In fact, we’ve had some wildfires here in Louisiana that consumed several hundred acres.

In addition to periodically thinning pine plantations, prescribed burning reduces fuel loads and greatly reduces the risk of subsequent fires, planned or unplanned, getting intense enough to pose a risk to personal property and human safety.  Fire will have a tendency to gently crawl through the understory, rather than climbing and spreading through the canopy.

As a prescribed fire consumes understory plants, it releases the nutrients in those plants back into the soil.  In a sense, it fertilizes the trees.

With the available incentive programs today, some landowners are giving consideration to longleaf pine as an alternative to loblolly. Because longleaf seedlings initially grow slowly and their needles may be at ground level for several years, they are very susceptible to brown spot needle blight. Prescribed fire is a very effective control measure for young longleaf pines.

Insect control is another important use for fire.  What many may not realize is that periodic burning is shown to drastically reduce tick populations.  With Lyme disease being a real concern these days, prescribed fire offers a natural way to control ticks that carry the disease.

Aldo Leopold, considered as the “father of wildlife management”, once said the three tools for wildlife management are the ax, the plow, and the match.  What he meant was that wildlife thrives on disturbance, including that caused by fire.  Grasses, forbs, and shrubs experience a flush of new growth following a fire.  This new growth is more palatable and nutritious to browsing animals than the woody, mature vegetation occupying the site before the burn.  Grazing animals, such as cattle, benefit from this new growth as well.  Many beneficial insects that birds consume are more abundant and readily available after a fire.

When many think of fire in the forest, the first image that pops in their mind is black and ugly.  That’s a reality on sites where a wildfire has ravaged the landscape.  However, a controlled burning program can improve the appearance and aesthetic value of an area.  Repeated prescribed fires improve the visibility in a timber stand by creating a more open understory.  Fire tends to promote flowering plants and improve the scenery.

This “curb appeal” has three distinct advantages.  It sends a message to potential trespassers that the tract is being actively managed and not forgotten.  It can make the tract more appealing to buyers, should you consider selling the land.  The third advantage, believe it or not, is that it makes it more attractive to timber buyers.  Allow me to explain that.  Here in central Louisiana, and much of the south, we have a buyer’s market.  Timber buyers have so many sales to consider that they can pick and choose which are attractive and convenient.  Tracts sometimes get “culled” because the understory is so thick they can’t move through it to get an accurate estimation of the timber volume and value.  It happens!

Prescribed burning is an extremely effective management practice for landowners and managers, yet it’s rarely used on private land these days.  Dollar for dollar, it’s the most effective tool we have.  However, due to the risks associated with fire, burns should only be conducted by experienced persons under ideal conditions.  It takes planning and serious consideration to objectives, weather, location, and liability.  Forestry consultants, the folks at your state office of forestry, and other certified in prescribed burning can offer much-needed guidance and assistance.